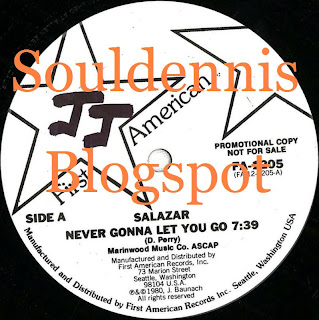 The label First American released many disco singles. One of them is the track “Never gonna let you go” by Salazar in 1980. Very good track with killer sax which was composed by David Perry. Salazar also released another 12 inch on the same label entitled “1-2-3 / Let's hang on” in 1980. Salazar recorded two albums on the same label in 1980-81 entitled "Salazar" and "Salazar II". Lead singer of the group is Pete Salazar. David Perry was also on guitar and keyboards.


Note: The above posted single is not played in full
Posted by Souldennis at 8:33 PM 1 comment: 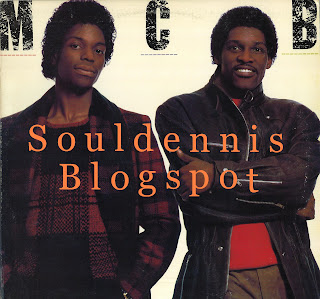 MCB are Aaron Mills (spectre bass / music man bass / fender precision bass and lead vocals) and Jeryl Bright (trombone / lead and background vocals). Aaron Mills started with the band N.C.C.U (New Central Connection Unlimited) and later became member to the famous funk band Cameo, Jeryl Bright was also member of the band Cameo. Both of them collaborated with Ramsey Lewis, Donald Byrd and Kevin Toney. Aaron Mills and Jeryl Bright formed MCB group. They recorded one and only album on Epic in 1983. In this album participated Belida Woods (was member of the group Brainstorm) on vocals and Phenix Horns (Don Myrick on sax, Rhamlee Davis on trumpet, Louis Satterfield on trombone and Mike Harris on trumpet). Also Thomas T.C. Campbell (was member of the group Cameo) on piano and Wayne Kee on guitar and vocal. Produced and arranged by Tom Tom 84 and MCB. I chose two fantastic tracks entitled "I'm the one, you're the one" and "Bring it back (to the music)". Solo sax by Don Myrick.

Note: The above posted tracks are not played in full.

Posted by Souldennis at 3:17 PM No comments: 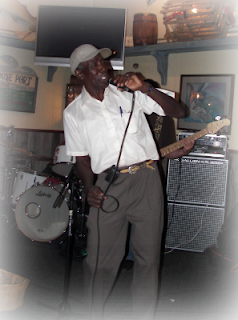 Jim Manns has been singing Rhythm and Blues for many years, entertaining people in the Chicago area, Michigan and Indiana.
He grew up in Nutbush, Tennessee. Home of Tina Turner whom he grew up with. Many collectors looking for the 12 inch (I got to have your love / Everybody likes it) by Jim Manns on Black Giant Records. 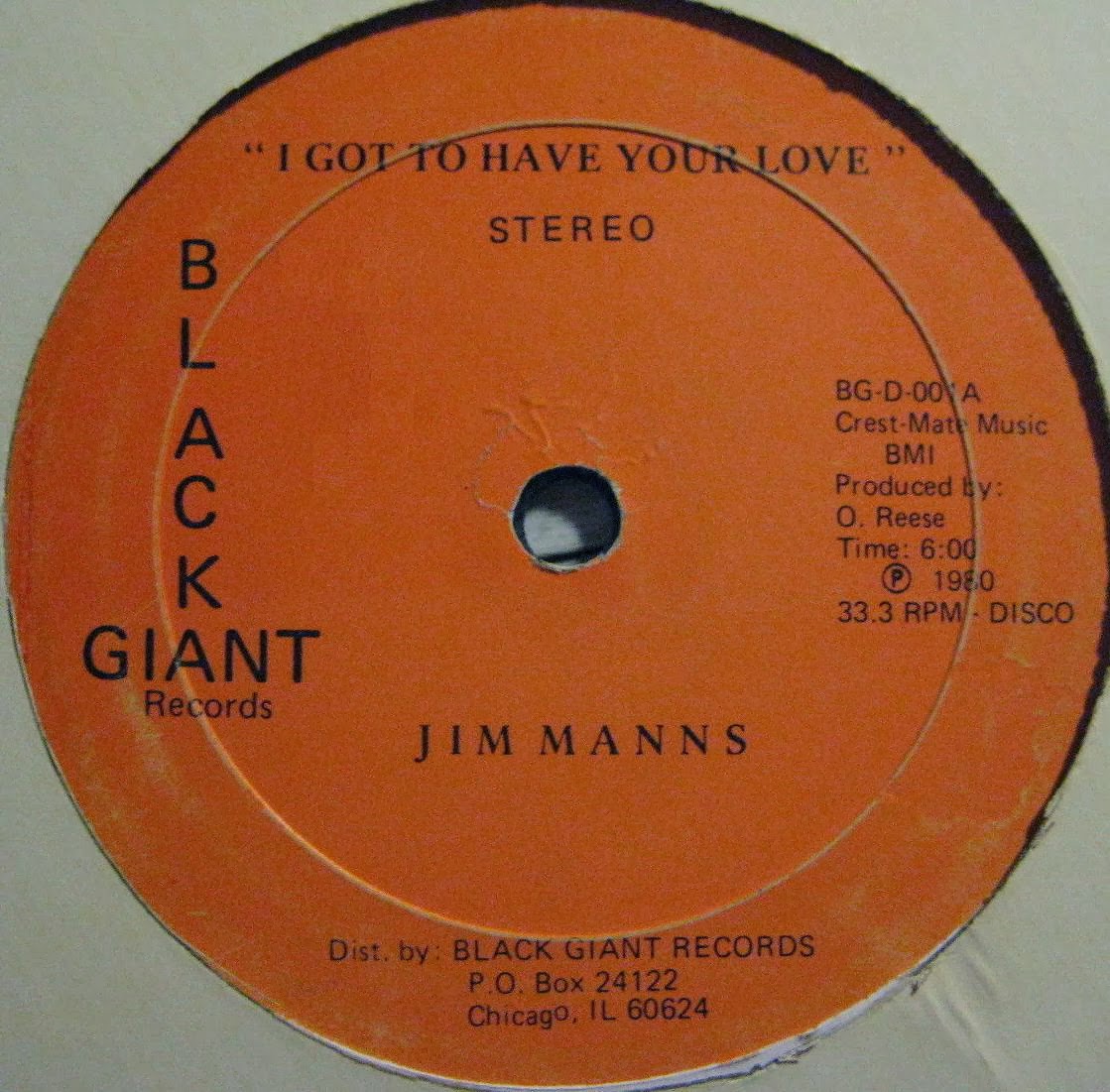 In fact, these 2 tracks are the same with tracks titles "Sugar baby" and "What you got" which were released later on his album.


However many collectors don’t know that the first recording was released by Norman Brown (not to be confused with the famous Smooth Jazz guitarist). Norman Brown released this 7 incher on Sound Town Records in the late 70s. Horn and string arrangements by Don Burnside. He was also composer on "Sugar". Donald Burnside later collaborated as producer and songwriter with Elaine And Ellen, Yvonne Gage, First Love, Chi-Lites, Gene Chandler and many others. 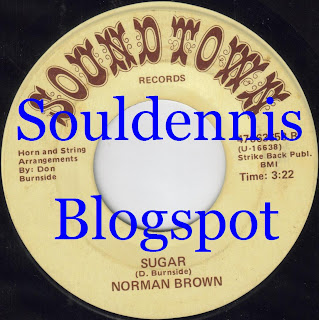 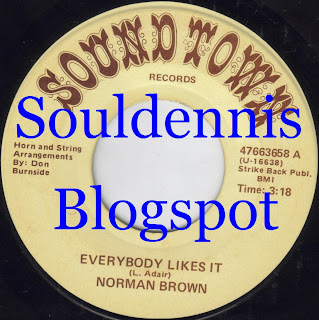 Note: The above posted tracks are not played in full.

For many years now, Jim Manns' 12inch has been sold for over $ 100.
Therefore, how much should anyone give for Norman Brown's rare 7inch original?
Posted by Souldennis at 5:47 PM No comments: 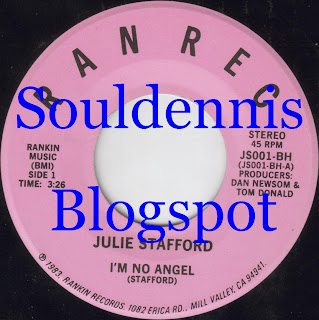 For one more time I'm posting an obscure and rare 7 incher but it is not expensive. It was released on Rankin Records in 1983. Julie Stafford was unknown singer. In the late 70's she sang for the group Crossection. This boogie track was composed by herself. Produced by Dan Newsom & Tom Donald.

Note: The above posted single is not played in full
Posted by Souldennis at 5:08 PM 2 comments: 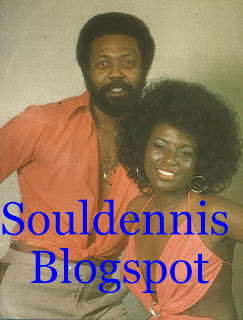 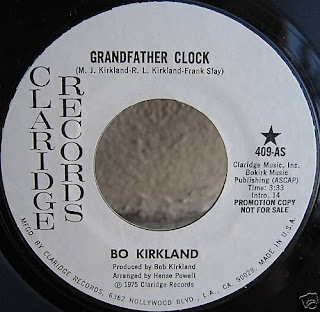 The album was produced by Bo Kirkland and arranged by Hense Powell. I have chosen a fantastic track entitled "You're gonna get next to me". 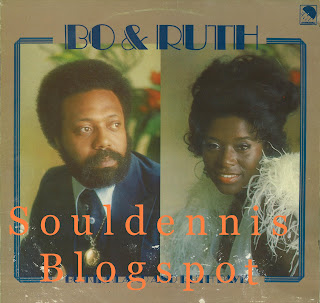 Note: The above posted single is not played in full
Posted by Souldennis at 11:47 AM 1 comment: 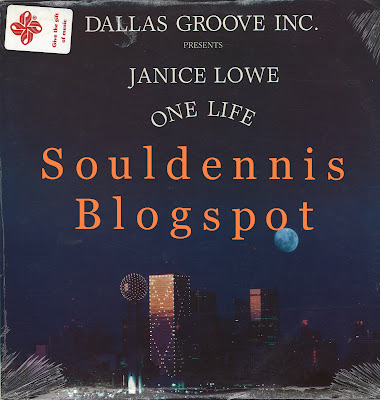 This album is a private modern soul from Dallas, Texas. It was released in the early 80s by Janice Lowe on Dallas Groove label. Most of the musicians are unknown. Lead vocal by Janice Lowe. Tenor sax and flute solo by Hubert Knight. Produced and arranged by Rudy “Tunes” Wilson. I chose two tracks entitled “One life (extended version)” and “(Is It All) In Vain”.


Note: The above posted tracks are not played in full
Posted by Souldennis at 11:37 AM No comments: 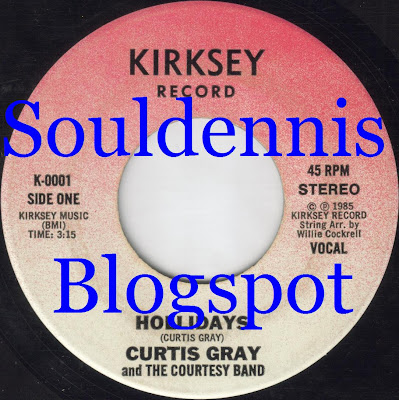 Curtis Gray is an unknown singer. He recorded the song "I never love again" in the late 70s which was released on O.P.S. Records.
In the mid 80s he recorded another song entitled "Hollidays". It was released on the small label called “Kirksey Record” in 1985. String arranged by Willie Cockrell.


Did Curtis Gray release any other records? If you know then please email me at the address above.

Note: The above posted single is not played in full
Posted by Souldennis at 5:26 PM No comments: 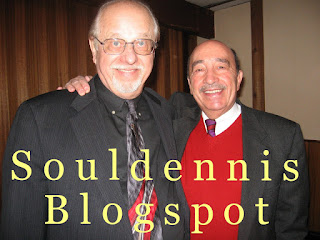 The picture above is a picture of Dennis Coffey and George Katsakis today. 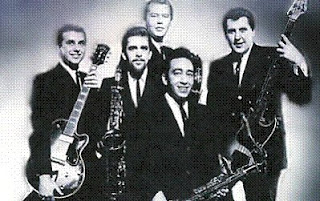 The picture above is a picture of the Royaltones (early 60’s) with Dennis Coffey on Guitar (left) and George Katsakis on sax (front).

Coffey learned to play guitar when he was thirteen in Copper City in Michigan's Upper Peninsula. At the age of fifteen he played on his first record, session backing Vic Gallon on "I'm Gone" on the Gondola record label.[1] In the early 1960s he joined The Royaltones who had had hits with "Poor Boy" in 1958 and "Flamingo Express" in 1961. The Royaltones played sessions with other artists including Del Shannon.
As a member of the Funk Brothers studio band, Coffey played on dozens of recordings for Motown Records, and introduced the wah-wah guitar sound to Motown record producer Norman Whitfield's recordings. He also played on Edwin Starr's "S.O.S. (Stop Her on Sight)," The Isley Brothers' "It's Your Thing", and Freda Payne's "Band of Gold". In addition, Coffey scored the blaxploitation film, Black Belt Jones.
In 1971, Coffey recorded "Scorpio" which was a million selling instrumental single that peaked at #6 on the Billboard pop chart. This received a gold disc awarded by the Recording Industry Association of America on 9 December 1971. The follow-up in 1972 was "Taurus", both credited to Coffey and the Detroit Guitar Band. Since then, he has recorded several solo albums, most of them for the Sussex and Westbound labels. 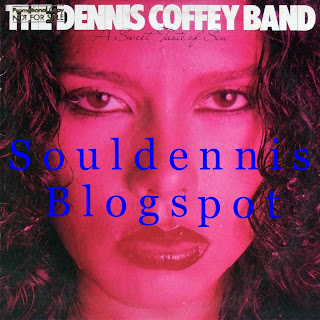 From the last Lp on Westbound label entitled "A Sweet Taste of Sin" in 1978, I have chosen a mellow track. You can enjoy the track "Someone special". Vocals by himself and Cleveland Horne. Produced by himself.


While at Sussex Records Coffey arranged and produced along with Mike Theodore the million selling "Nice To Be With You" by the group, Gallery. Dennis Coffey and George Katsakis did the production of the album entitled “Motor City Magic” by Dennis Coffey in 1985.
In 2004, he published a memoir, Guitars, Bars and Motown Superstars.


Note: The above posted single is not played in full


I want to thank a huge collector in Greece “G. Poly” who brought Dennis Coffey to my attention in the mid 90s , especially the great album entitled “Back home” in 1977.

Posted by Souldennis at 9:14 AM No comments:

Sweet Thunder - I leave you stronger 1979 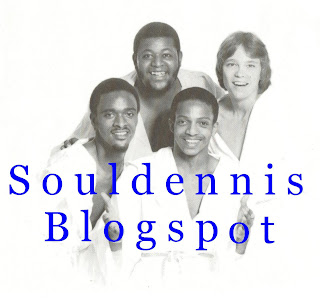 Sweet Thunder was a four man band from Youngstown, Ohio. The members, all born in either 1955 or 56, were Charles Buie (vocals/lead guitar), Rundell Alexander (bass), Booker T. Newberry III(vocals/keyboards), and John Aaron (drums). They were formed in Philadelphia, in 1975 by Booker T. Newberry III. They recorded three albums entitled "Above The Clouds" in 1976, "Sweet Thunder" in 1978 and "Horizons" in 1979. 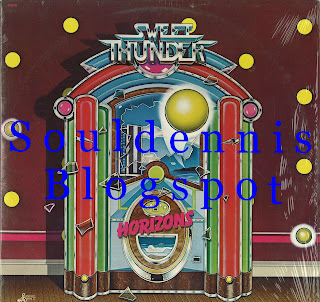 From the last album that released on Fantasy WMOT records, I have chosen a killer track entitled "I leave you stronger". Sax solo by Mike Pedicin Jr. Produced by Sweet Thunder, Larry James and WMOT Productions.


Note: The above posted single is not played in full
Posted by Souldennis at 6:33 AM No comments: 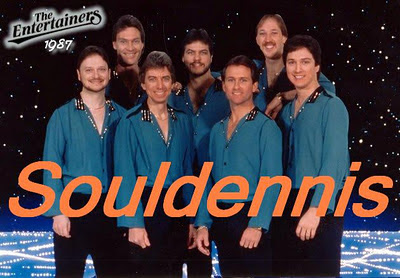 On January 18 I was "the bidding winner". I bought this 7 inch on ebay for 122$.
The Entertainers is a wonderfull soul group from North Carolina, who’s recording here strongly the beach music scene. The Entertainers were known with another rare single on HMC records in 1983 entitled “I’m in love with you”. This 7 inch is mega rare. They recorded on Metro records. Also this single is included on the mega rare album entitled “Don't let your love grow cold” released on the same label in 1987. The Entertainers were Earl Dawkins on vocals, Hugh "Tuff" Blanton on bass, Richard Robertson on trumpet & fluegelhorn, Ric Sanders on keyboards, Danny Baker on guitar, Marc Goins on drums and John Franklin on trombone. Produced by Tim Eaton. 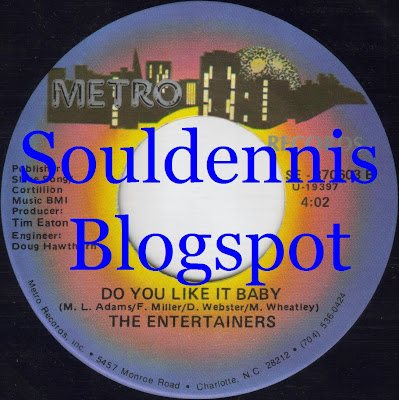 Originally was recorded by Slave in 1982 on Cotillion Records. Also it was released as a single entitled "Do you like it ...(girl)"
Posted by Souldennis at 9:30 PM No comments:

Henry Turner's Crystal Band - Giving My Love Up To You 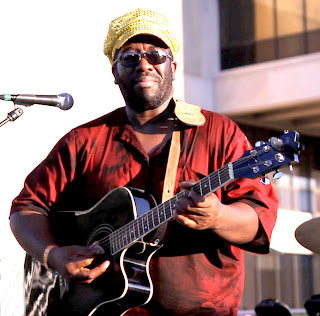 Milwaukee-based label Lotus Land released a 7 incher entitled “Giving My Love Up To You / Music” by Henry Turner's Crystal Band. Both of these songs previously were unreleased. Henry Turner had recorded these songs that he had forgotten in a cassette tape. Henry Turner has recorded different styles in his career such as smooth soul, funk and reggae. Today he has formed another band called Henry Turner Jr & Flavor.
Crystal band was the first band of Henry Turner in the early 80s. The band also released under the name Crystal a single entitled “Forever us / Once again” on Hit City records from Baton Rouge in 1984. This single became sought after between the collectors. 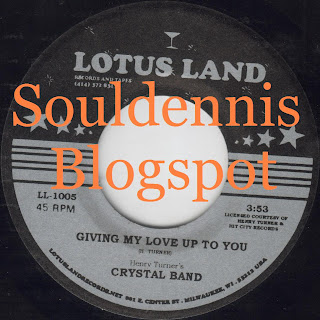 For more info about Henry Turner Jr. you can see here

I have seen only four 7 inch by Faye Marshall. The first 7 inch was released on Brown Door records. She recorded two funky tracks entitled "You And Me / Goin' Home". The second was released on Fay-Don records in 1979. She recorded also two tracks entitled "Tonight I'm Gonna Make You A Star / You're always here to say goodnight". The third was released on the same label, on Fay-Don Records in 1985. She recorded one track entitled "Love and happiness".
Discogs mentions a fourth 7 incher entitled "Chain Reaction / All I Want Is You". Recorded as Miss Faye Marshall from 1976 on Icepac Records. Also she was associate producer in the gospel album “Stay with the lord” by Emmit Powel in 1982.
I have chosen tracks from 1979. Produced, arranged and conducted by Wardell Quezerque. 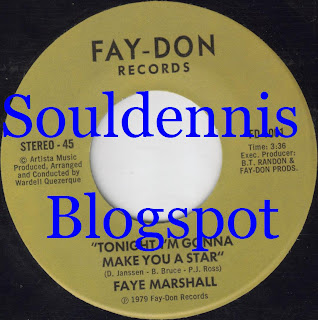 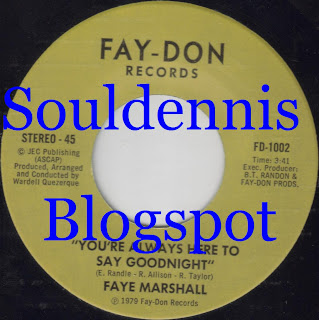 If anyone knows more than these 4 recordings, drop me an email.

Note: The above posted tracks are not played in full
Posted by Souldennis at 4:01 PM 1 comment: