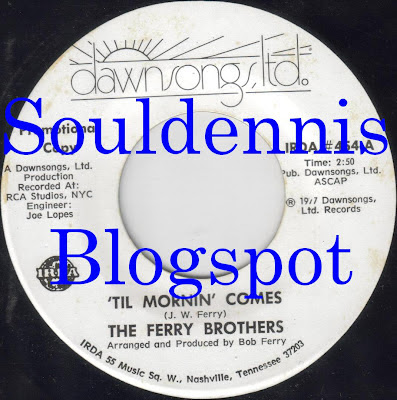 Two years ago, I presented Joe Ferry and the single entitled "I'm Sorry" on DawnSongs LTD Records. It was released in 1977. As I have already mentioned in the same year Joe Ferry along with his brother Bob Ferry released a single under the name The Ferry Brothers entitled "Til Mornin' Comes / Dawn" on the same label.
Both of these songs were recorded at RCA Studios, NYC. Arranged and produced by Bob Ferry.

I have chosen the song "Til Mornin' Comes". It was written by Joe Ferry.

Finally I want to mention that Joe Ferry released a single entitled "Follow my lead / Pretty lady". It was released in the same year on the same label.
Note: The above posted single is not played in full
Posted by SoulDennis at 7:39 PM No comments:

Serenity - Tired Of This

Serenity was an obscure soul funk gospel band. The band was formed by the songwriter, singer Tyrone Dickerson. Some members of the band were Tyrone Dickerson, the guitarist Phillip Ratliff and the songwriter Joseph DuVal Ross.
Tyrone Dickerson became known as a songwriter. He has written songs for many artists. He has served as music director for Yolanda Adams and Ben Tankard. He has also collaborated with Regina Belle, Kirk Whalum, Twinkie Clark, Marvin Winans, Chicago Mass Choir and many others. 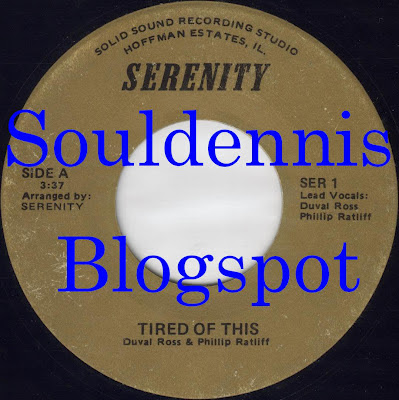 The band probably released their first single in 1983 entitled "Tired Of This / Perfect Way". Both of these songs were recorded at Solid Sound Recording Studio, Hoffman Estates, Il.
I have chosen the great song entitled "Tired Of This". Lyrics was written by Phillip Ratliff and DuVal Ross. Music was written by Phillip Ratliff. Performed by themselves.

Serenity released another single entitled "Took a second look / I can't wait" on Magnum Opus Productions. The members were Tyrone Dickerson on keyboards, Phillip Ratliff on guitar, Clyde Davis on drums, Curtis Clark on bass, Rev.Ferlander Lewis on keyboards and Kenny Chatman on guitar. The band collaborated with the late producer Billy Carson. Tyrone and Phillip did the vocals.
Later when the group disbanded, Tyrone Dickerson formed a band called The Christian Fellowship Choir. He has also released a few albums CD along with the choir.
Note: The above posted single is not played in full
Posted by SoulDennis at 11:39 PM 1 comment: 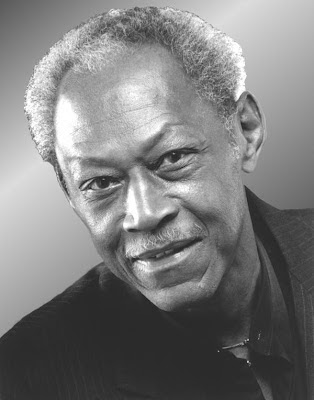 St.Clair Pinckney was a great saxophonist. He was born in 1930. He was a member of The James Brown Orchestra and The J.B.'s. He joined in the band in the early 70s and since he performed with this band. In the late 80s he released two albums on Ichiban Records entitled "Do you like it" in 1987 and "Private Stock" in 1989 respectively. Today I'm presenting the second album from 1989. 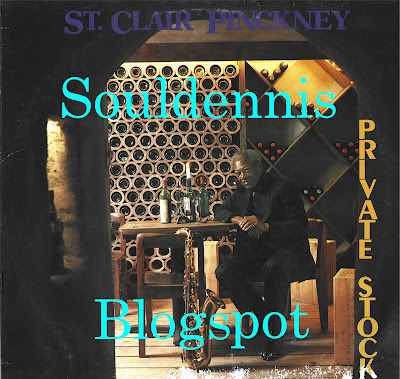 This album was recorded at Sound Lab, Atlanta, GA. except for the song "From The Head" at The Hut, Augusta, GA. Some great musicians appeared in this album such as Alfred "Pee Wee" Ellis on tenor sax, Fred Wesley on trombone, Marc McCreary on keyboards. Also Tim Nash on drums,  Jean-Marc Porson on bass, Jack Linge on guitar, Ted Dortch on alto sax and Buzz Amato on keyboard solo.
Produced by St.Clair Pinckney. I have chosen two tracks entitled "Night Stroller" and "A Summer Night".

You can see St.Clair Pinckney at Montreux Jazz Festival in 1981 where he appeared along with The J.B.'s.

Sadly he passed away in 1999, on February 1.
A version of the J.B.'s including Fred Wesley, Bootsy Collins, Pee Wee Ellis, Bobby Byrd and Clyde Stubblefield assembled to record the 1999 "reunion" album Bring the Funk on Down, dedicated to the memory of St. Clair Pinckney. The album was released in Japan by P-Vine Records, and in 2002 it was reissued in the U.S. by Instinct Records.

Note: The above posted tracks are not played in full
Posted by SoulDennis at 2:58 PM No comments: 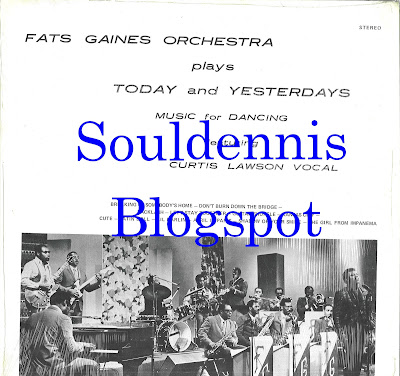 William Carl "Fats" Gaines was born in Coffeyville, Kansas. He has played trumpet and alto saxophone. Fats is mostly known for his leading ability. He organized his first group called Fats Noisy Seven in elementary school. His career started during World War Two, in the 767th Army Air Force Band as a sousaphone player. He played trumpet in army swing band.
In the 70s he formed a band called Fats Gaines Orchestra. The band featured in many Social Clubs in the Bay area such as The Knights of Honor, The Spiders, The Thirteen Charms, Los Amigos, C.B.Communicators, Metronomes, Fifty Sports Man's, The Jolly Glow, The Jolliets.
This band was one of the best big bands based in San Francisco. The members of the band were the same members for the past four and a half years. The band released his first album under the name Fats Gaines Orchestra plays Today and Yesterday on Avamar Records. It was recorded at Wahlberg Recording Studios, San Francisco.
In this album appeared Fats Gaines on sax, Jerry Whitmore and Napoleon (NAP) Henry on guitars, Johnnie Ingram on string bass, John L.Thomas and Edward Hammond on electric bass, Roy Henderson and Charles Nelson on tenor sax, James Brown (brother of Mel Brown) on piano, Hugh Parker on drums, Harold Phillips on trumpet, Albert "Hassen" Wardlow and George Alexander on trombone. Finally Curtis Lawson on vocals.
Today Curtis Lawson is a great singer of blues music in the Bay area.
I have chosen the famous song of Al Green entitled "Let's stay together". This version is an unknown one but very nice.
Later Fats Gaines released two more albums. The first album was released on Avamar Records in 1981 under the name Fats Gaines Band entitled "SOULJAZZDISCO". The second album was released on the same label in 1983 under the name Fats Gaines Band presents Zorina.

Sadly Fats Gaines has passed away.

Note: The above posted track is not played in full
Posted by SoulDennis at 12:02 AM No comments:

Brenda Vaughn - Ready or not (I'm falling in love again) 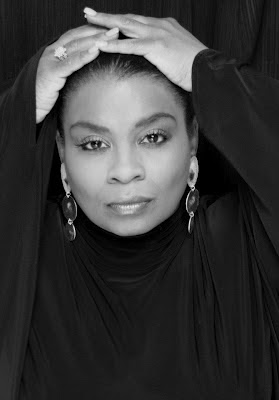 Brenda Vaughn is a great singer from Oakland, California. She is also songwriter and music coordinator. She was born in 1958. She started singing at the age of 4. Later, she entered in the Gospel Jazz Choir of the Merrit College under the direction of Jackie Hairston. She started her professional career as a singer in several spots such as Dock of The Bay, Ivey’s In Jack London Square, Erles Solano Club, The Hyatt Regency and later Geoffrey’s Inner Circle.
When she became known in her area, the label Pashlo Records spotted her and signed with her. In the early 80s she released her first single entitled "Ready or not (I'm falling in love again) / Nature's calling". 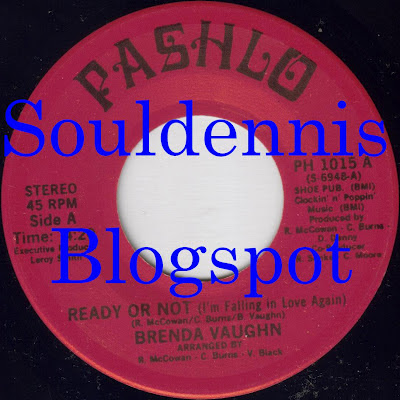 The flip side "Nature's calling" is a funky song. This single received great reviews and opened many performance opportunities.

Later Brenda discovered her talent on production. Brenda produced/co-produced/coordinated special events with so many major recording artists such as Cece Peniston, Jimmy Jam and Terry Lewis, Ann Nesby, The BET Presents Motown Talent Search, Brian McKnight, Kashif and the love her life, “Sunday Gospel Brunch”! As a result, Brenda formed a production company called “Sistuh To Sistuh”. Brenda received awards for Best Entertainer and Best Recording Artist in the Bay from The Top Star Awards in The San Francisco Bay Area and was also presented with Oaklands proclamation Dec 12, 1997 this was declared Brenda Vaughn's Day! She started to travel all over Europe and Asia. For some reasons she moved from Oakland to Japan, where she gained big recognition and success. For those long time achievement, on April 2007, she was honored as “Living Legend Award” at Bay Area Black Music Awards. She also has received one triple platinum and two platinum awards for her coordinating work with Japan's Ki/oon /Sony Music recording artist The Gospellers. Finally, Brenda had a chance to perform at one of President Obama’s inauguration parties, as a background singer.
In 2010 she released a single CD entitled "The worst is over" on B.International Entertainment LLC. Her new full CD coming soon.
For more info about Brenda Vaughn you can see here http://www.reverbnation.com/brendavaughn


Note: The above posted single is not played in full
Posted by SoulDennis at 11:32 PM No comments: